KELVIN – HELMHOLTZ INSTABILITY IN SCIENCE, ART AND THE NATURE 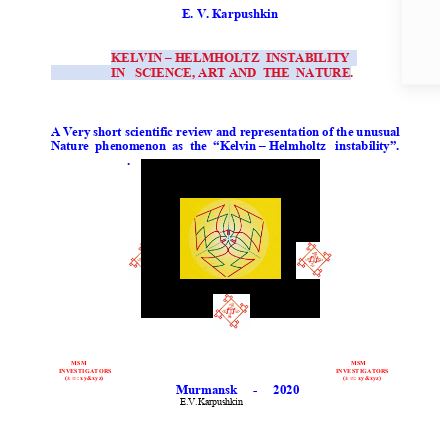 In   this  Article, the “Kelvin - Helmholtz   instability  in  Science, Art, and   the  Nature”,
is written about the famous Natural but seldom event in our life that has now a lot of  their
fans and the usual followers & observers as in scientific circles of the  Earth’s progressive
Societies & States as inside of the tiny family cells in view of the “kitchen” people as well.
The  above  mentioned  event  is  a  very  seldom  one and that is why it  has a very  small
base of the demonstrative information and  the scientific publications, made  by the famous
scientists.Even the Holland postimpressionist with the World’s name as Vincent Van Gogh
has created  only  one  masterpiece  under  the  name “The  Starry  night”, where the real
elements  of   Kelvin - Helmholtz  instability  are perceptible on  the  thinnest  human  level.
In their time, these two scientists, Lord Kelvin & Hermann Helmholtz were busy very  much
being  investigating the well-known  today physical problems which they could only observe
in their scientific experiments with the usual water, having the same physical  properties  and
parameters  but  the different densities. The results of their scientific investigations became a
new page in the physics science & the base for their further investigations.The same scientific
pictures were seen not  only  in  the  liquids but in  the clouds  flow on  the  sky, the  surface
of the marine waves movement at the sea shore or in  the open ocean, and  even  in  the  far
Space,  for  example, with  the  rings  of  Saturn, a  planet  of  our  Solar   system   as   well.
The  Author of   this   text  has  become, some  years  ago, the  occasional  witness of  this
Natural event and he has made three photos gallery. The local specialists have explained to
me, who never listened about such a very seldom fact and object of  the  Nature,  its  name
consisting of  two surnames as the Kelvin-Helmholtz instability. In some days,  the  popular
local evening city newspaper “EM” has published in one of its  issues the color photo with
my short story  about  its  origination. The  newspaper readers  were surprised very much.